The time between our brains receiving the message “Ache in bum region” to the time the message changed to “What heavenly surroundings,” was once again very rapid. The ascent up the side of the ridge was steep and wild and the trail rutted and crumbly. Gauthier carries Ollie in the basket except when riding up hills. Here’s how it works: I generally follow behind; when Gauthier stops at the base of hills to remove Ollie, he yells, “Go Emily, go!” at which cry I whiz past and Ollie tears after me. 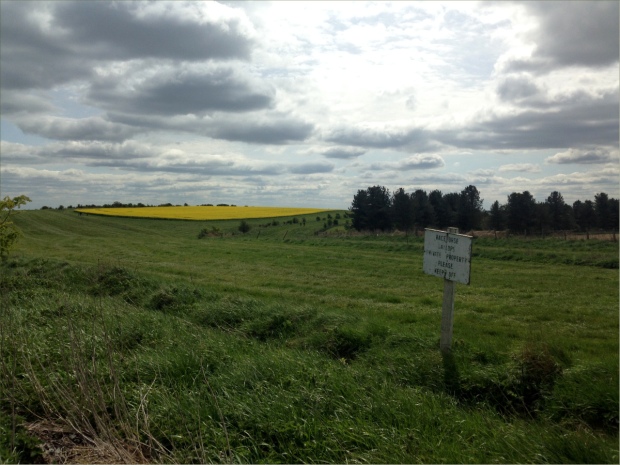 The section of The Ridgeway between Wantage and Goring is a dream to ride. It has large stretches of grassy hard-pack, hardly any ruts, and few if any steep hills. 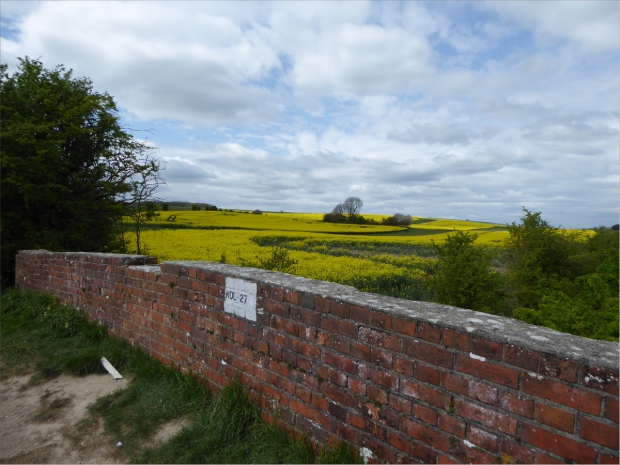 We stopped to have a snack atop a derelict GWR tunnel. “I remember riding this line with my dad before it was shut down in 1963,” a passing hiker told us.

Before we knew it we were saying goodbye to The Ridgeway and turning our bikes towards Goring, a village of 3,200 inhabitants with a Norman church. 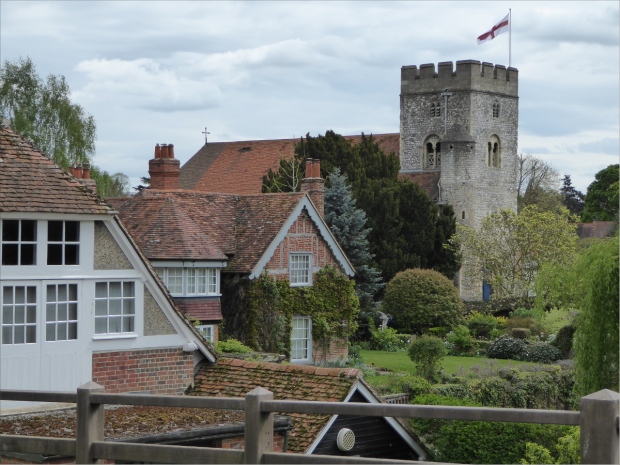 Goring was recently in the press for being the home of and place where George Michael passed away. It’s also Wind in the Willows country.

The homes are old, posh and lush. Goring Lock (above) is situated in Goring Gap.

Catherine Wheel is Goring’s oldest inn, dating back to Elizabethan times. It serves traditional British food (i.e., a variety of roast dishes) and real ale, hosts live jazz, has a predilection for all things French… 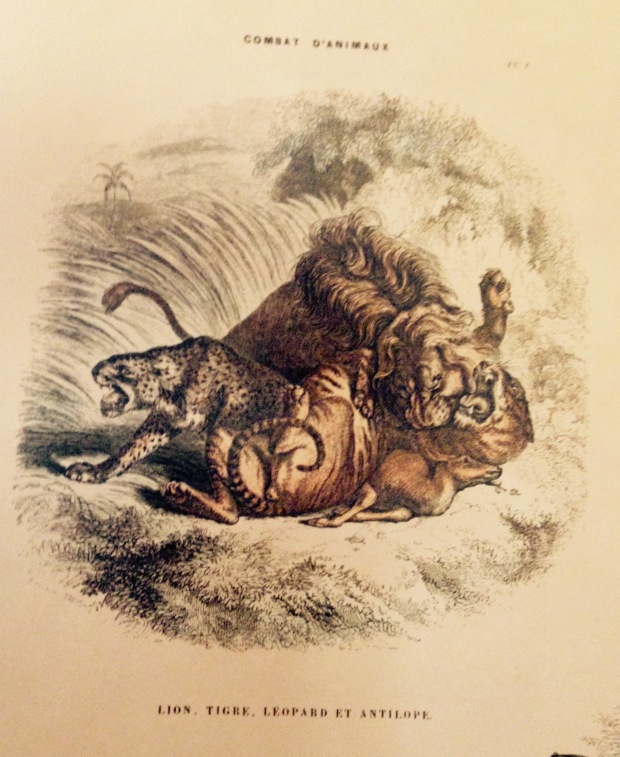 and a sign at the bar informs guests that “Witches are welcome.”

Our final stop was Reading and to get there we took the Thames Path, which cuts through The Ridgeway just north-west of Reading at the Goring Gap.

We followed a quiet, gently descending road, canopied by trees and intermittently littered with horse droppings. The soundscape was fantastic: birdsong, burbling brook and the distant clip clop of horses’ hooves. Hidden behind the dense foliage was a large estate with another lovely Norman church. 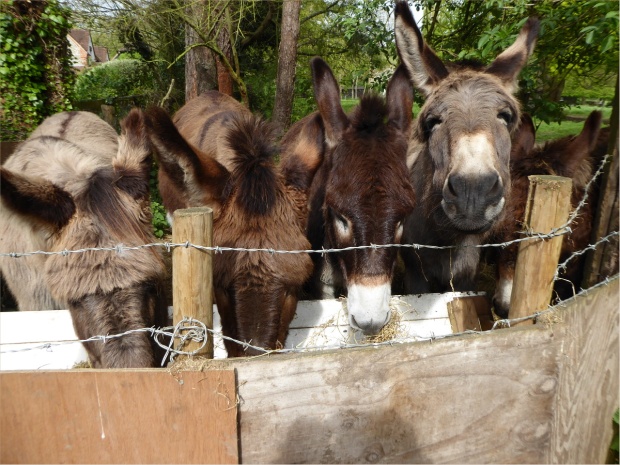 Ollie loves donkeys. These friendly fellows ambled over to say hello. Ollie gave one of them a little lick on the nose.

After taking us through the countryside, the Thames Path took us up a pine-scented hill with a wonderful view of the river. 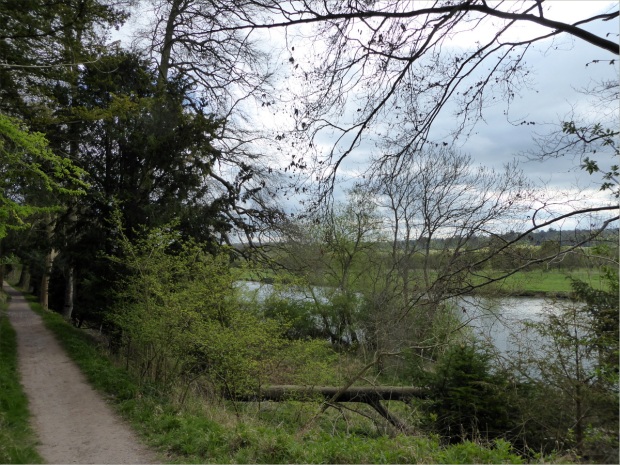 The trail was narrow.

Can you picture Mr. Toad careening down this hill in a motor car? “Oh, pooh! I’m not afraid of heights! Silly, boyish fear! Sheer waste of time! Toot, toot!!”

It took a bit out of us to carry our bikes up this slope. Parts of the Path front lavish homes.

and other parts take you past farms.

And a very short detour takes you to Mapledurham, a tiny village of 317 inhabitants named after a 12th century family estate with one of the largest Elizabethan houses in Oxfordshire.

Also on the estate is the only water mill on the Thames to be in commercial production; the same water mill that graces the cover of Black Sabbath’s first album.

Among the films and television programs filmed here are The Eagle has Landed, Miss Marple and Midsomer Murders. 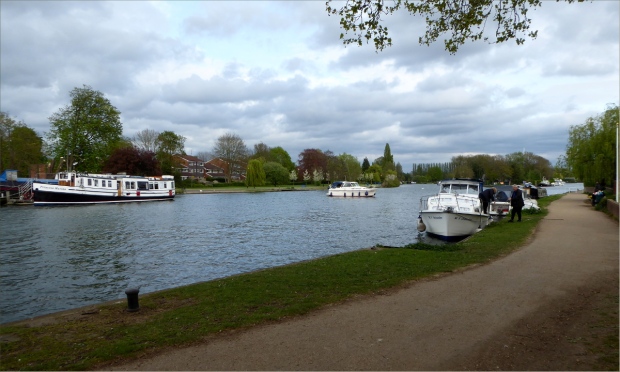 Thames Path brings you almost to the doorstep of the Reading train station. With only minutes to spare until the next train left for London, and loath to wait an hour for the next one, we raced through the large station with Ollie at our heals and reached the train just in time. As Gauthier swung his bike aboard, Ollie leaped on after it, hopped up onto an empty seat and curled into a little ball. He was not about to be left behind!

To read more about our experience cycling the Ridgeway Trial, see our posts for Day 1 and Day 2.