Cycling Cornwall is not for the faint of heart. Arriving by train in Truro, the county capital, and stepping off the platform, we quickly learned what a twenty degree incline looks like. “An undulating plateau at three hundred feet” is how one local told us his secondary school teachers had taught him to regard Cornwall’s geography. “You notice the contradiction in terms?” he said, “A plateau by definition can’t undulate.” Cornwall has many plateaus atop many undulations, he explained, which we can attest to.

Truro to St. Agnes was the only muddy leg of the trip.

On the way to St. Agnes

On the way to St. Agnes 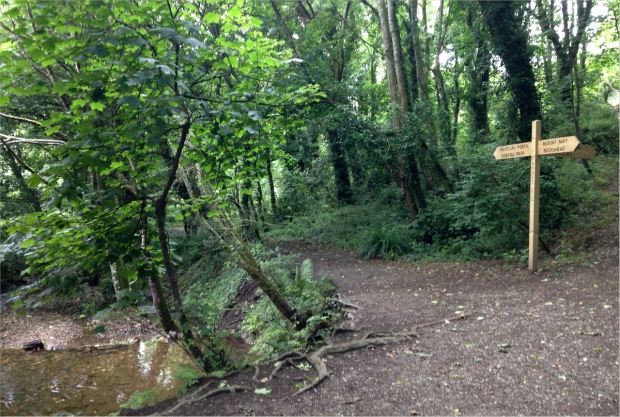 Having missed a turn, we found ourselves at the end of a dirt road and confronted by three boys assembled under a tree who forthrightly informed us that “You’re on private property.” Thankfully their dad popped his head out of a door with an injunction to the boys to “Show them how to get back onto the trail.” A hidden bridge brought us here.

St Agnes was our first stop. We camped overnight at Trevellas Manor Farm Campsite, owned and operated by the Trevellas family since the 1840s. Every year the family undertakes a new improvement project, and this year it was renovating the toilet and shower facilities. They were fantastic. To get to the campsite, we followed a trail overgrown with foxgloves. Looking up the trail, the sky was a blue disc.

The overgrown trail to the Travellas Manor Farm Campsite 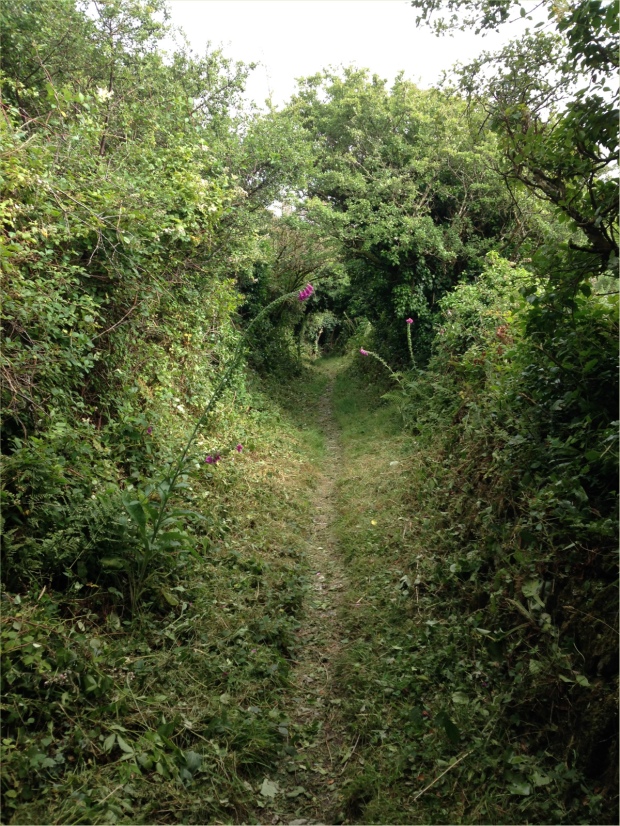 Shortly after setting up our tent, which the landlord thoughtfully located next to a westerly hedge to protect us from the wind, we were inundated with fog as thick as pea soup, as the saying goes. A dusk walk into town was somewhat treacherous. We took a narrow road, which we mistook for a minor road. As cars raced past us we were invisible in the falling light and the fog, which caused Gauthier to instruct me to “Be prepared to jump into the bushes,” by which he meant “Be prepared to leap into the thorny brambles that thickly cover the steeply inclined shoulder of the road.” Dinner at The Taphouse consisted of fresh crab, rocket salad with bell-shaped tomatoes, steaming ciabatta bread, and berries and meringue for dessert. It was worth the perilous journey into town.

Walking from the Travellas campsite to the narrow, but not so minor, road into town.

On the way back we followed a trail through the Blue Hills Tin Works. The site is now more famous for motorsport races than its rich industrial history. We stopped at Trevellas-Porth Beach. Crumbling smelt stacks poked out of the earth amidst ferns and flowering bushes, and a little stream flowed quietly under cracked stone bridges to meet waves that crashed onto a pebble beach. A hundred or so feet out to sea were shadowy sea stacks like the hands of a giant, rocky time keeper. 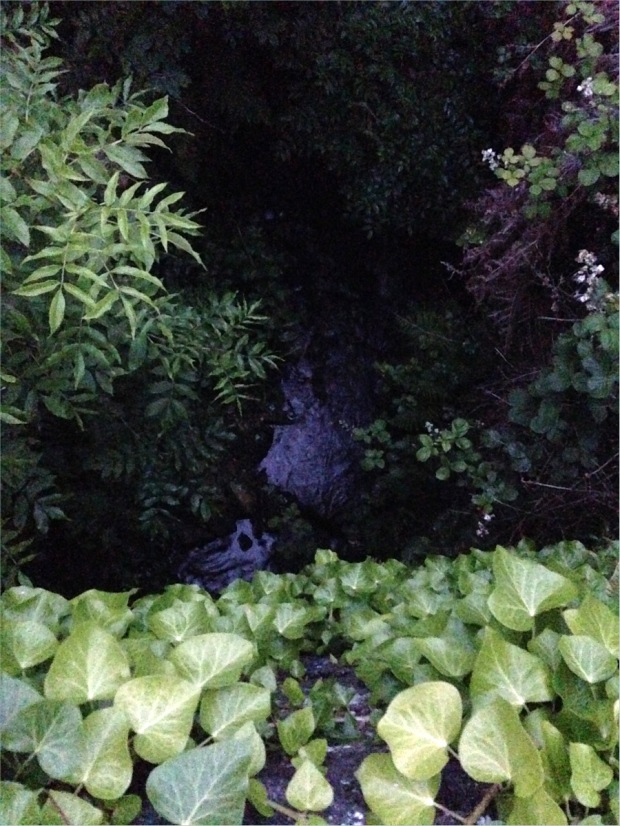 Next we headed for St. Ives. The roads undulated with the curvaceous landscape, past coastal towns with names like Porthtowan and Portreath. Many a hill we walked our bikes up, panting. But there was always a pub to quench our thirst when we reached the top. We cheated a bit nearing the end of the day and took the train from Lelant Saltings Train Station to St. Ives. 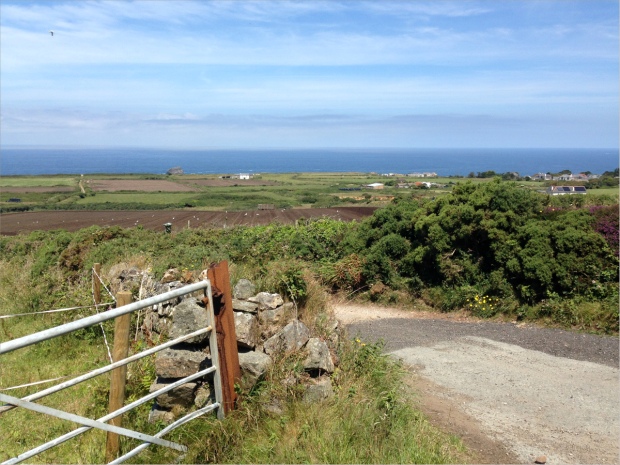 On one of those plateaus. Near Portreath, on our way to St. Ives.

On the way to St. Ives

On the way to St. Ives 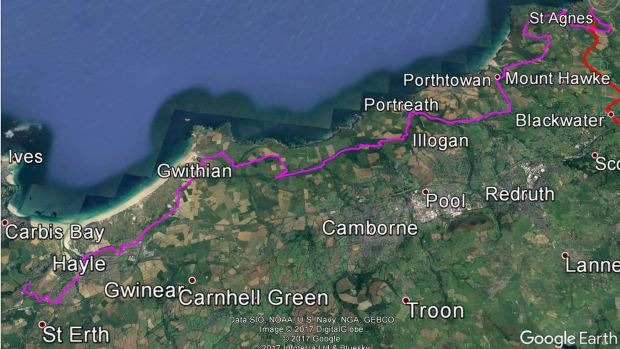 St. Ives was bustling, and Ollie in his basket was a major attraction. I don’t know whether it was talking to so many strangers or the ride, but I was absolutely exhausted by the time we got to Ayr Park, the campsite where we were to spend the night. And hungry! So imagine our dismay when we discovered at 8:30 pm that restaurants in St. Ives close at 9 pm. For half an hour we searched in vain for a restaurant that would take dogs. Then we bumped into The Sloop, an inn dating back to 1312 with the only kitchen in town that stays open until 10 pm. And they took dogs! 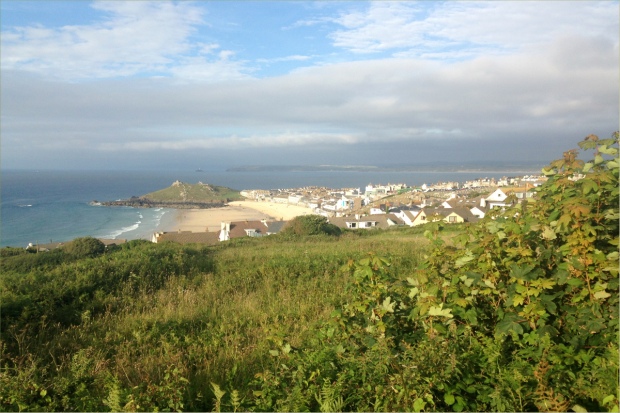 The next day we rode just south of Penzance via Mousehole (pronounced “moozle”) to Boleigh Farm, a working dairy farm with a fenced off field for campers. One of the farmers pronounced Gauthier’s name right on the first try, dispelling any doubts we had about the connection between the cultures of Cornwall and Brittany.

St. Ives to Lamorna via Penzance

On our way to Lamorna.

A very old, crumbled down stone fence on the moors.

A seagull with a view! 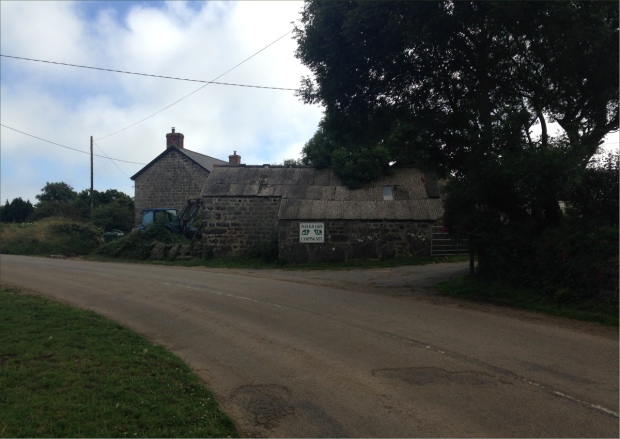 Boleigh Farm where the campsite was separated from cow paddocks by a three-rail fence and a hedge.

Dinner at the Lamorna Wink, in breath-taking Larmorna Valley, was phenomenal. A modest river flows down the valley, surrounded by enormous ferns and other plants we had only ever imagined could exist in pacific temperate rain forests, and were certainly not a feature of any other place we had visited in England. 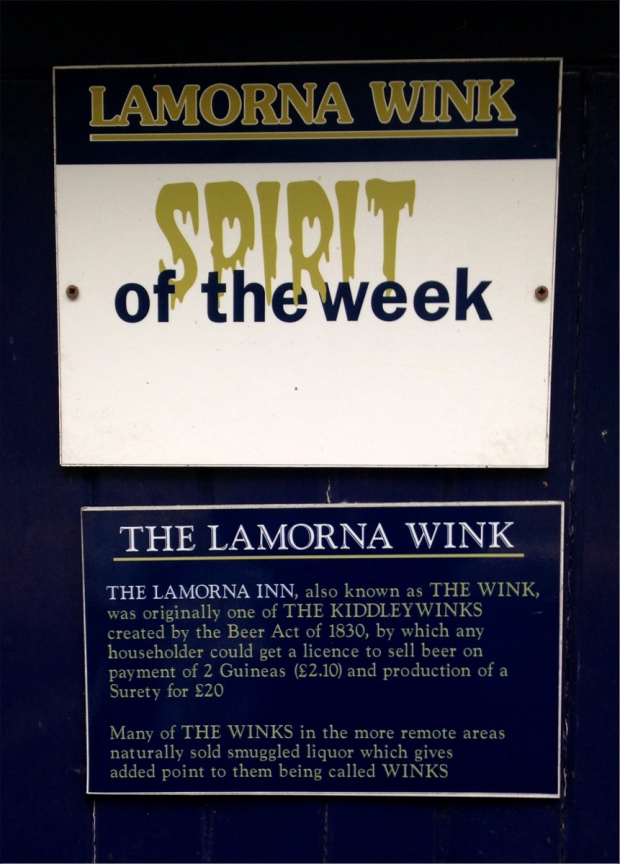 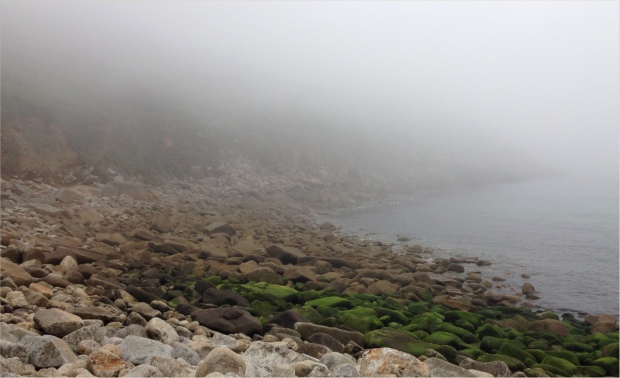 On day four we caught a train from Penzance back to London, vowing to return to Penzance as often as possible. And next time, to shop at the fish market! Before we left Cornwall, we had “cream tea,” which consists of tea and hot scones spread with jam and clotted cream… served the Cornish way with the cream on top of the jam. 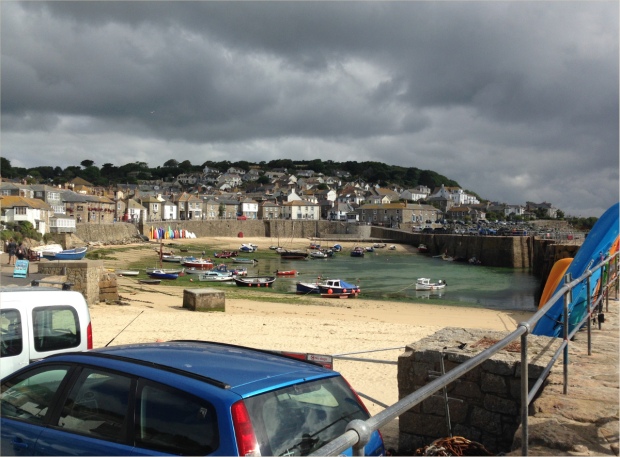 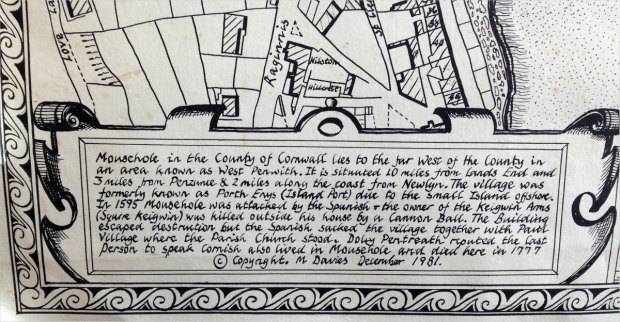 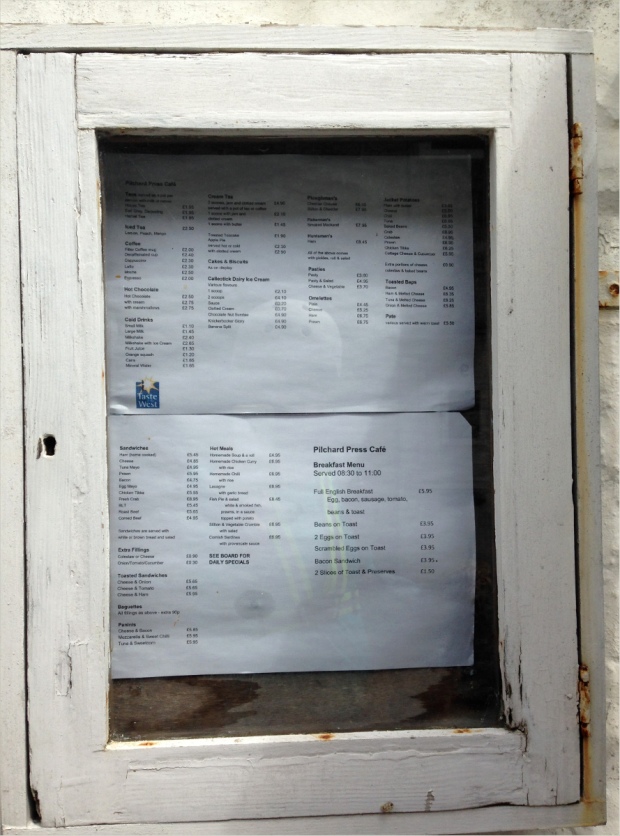 Apologies for the low res image, but this is where we had cream tea. Our waiter was unlike any waiter we’d ever had before. In appearance and accent he resembled a sailor. I was uncertain how to address him at first, but he was friendly, funny and knowledgeable, equally at ease talking about scones, pilchards and local history.