We were a lot more psychologically prepared on Saturday. Our bums ached a bit when we first set out, but the pain was quickly forgotten. We stopped again at Three Trees for scotch eggs and Belgian buns and then headed back up the side of the ridge. On the way we saw hang gliders!

This section of the Ridgeway is hillier than the section between Swindon and Avebury, but the hills are far gentler. We were treated to endless vistas, cows and sheep.

Uffington Hill Fort was a must-see and, conveniently, on the way. It’s one of several Iron Age hill forts built along the Ridgeway. Today it is believed that, contrary to popular belief, hill forts were not primarily used for defensive purposes, but rather were community centers in which Iron Age tribes or clans gathered for worship, feasting and to trade livestock, crops and other goods. Feast we did, nestled in Uffington’s ditch where we were protected from the wind. Grateful I was for my neck warmer and wind breaker. The wind up there was fierce! There were lots of kites and lots of dogs.

The Uffington chalk figure, known as the “White Horse,” was originally made by cutting a trench into the hillside beside Uffington Hill Fort and filling it with chalk blocks. For centuries local people have cared for the figure by “scouring” the surface and renewing the chalk infill to keep the horse white. In the 18th and 19th centuries, the Lord of the Manor provided food and entertainment for the scourers, which became a great annual celebration called the “Pastime” that attracted thousands of people. The White Horse is such a recognizable landmark that it was covered up during the Second World War to prevent it from being used as a navigation point by enemy aircraft. 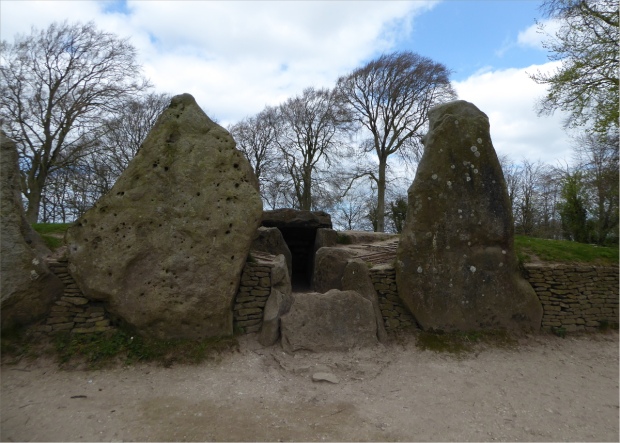 Chalk figures were popularly created by landowners two centuries ago to add a sense of timelessness to their country estates. More recently they were created to commemorate a regiment or war. However, excavations during the 1990s established that the White Horse dates from between 1,400 and 600 BCE.

The trail also passes by Wayland’s Smithy Long Barrow, a five-thousand-year-old, communal burial chamber. It originally contained fourteen people, but by the time the chambers were examined in 1920, they had been ransacked. Legend has it that if you leave your horse here overnight, it will be magically reshod in the morning.

Shortly before reaching Letcombe Bassett, our via-point to Wantage, we had a wipeout. My bike was fitted with grippy, fat tires built to handle uneven terrain, but Gauthier’s bike was not. The deep ruts, combined with the extra care needed to safely chauffeur the chien in his front-rack basket, resulted in the bike’s tire getting trapped in a rut. Oliver jumped gracefully from his basket before the bike hit the ground, but Gauthier fell with the bike. We learned an important lesson, which is that flint rocks have no problem slicing through human flesh. Go figure.

Letcombe Bassett was idyllic. St. Michael and All Angels Church, dating from the 12th century and now held by Corpus Christi College, Oxford, is an adorable building and the folk we met there – scrubbing the floor, mowing the lawn and braiding flower wreathes of every color – couldn’t have been kinder. Many times we had to decline the invitation to return home with them to dress Gauthier’s bloody knee. The man scrubbing the floor was also a bell ringer and told me all about full circle ringing. 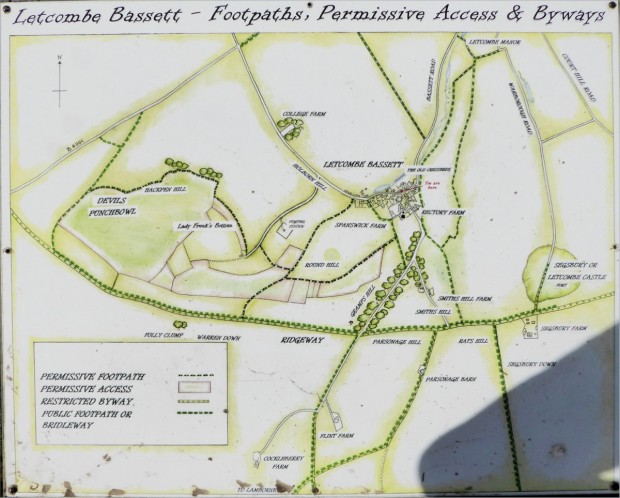 Outside the church, grazing sheep formed a backdrop to leaning grave stones, and horses in jackets like Ollie’s were grazing in paddocks framed by thatched farmhouses and stables. We followed a narrow footpath that followed a brook to the base of the hill where the brook had once been used to farm watercress. A sequence of similar footpaths delivered us to Wantage. On the way we met a retired farmer with a beautiful Shetland sheepdog who reminisced fondly about the intimate relationships that are formed between sheepdogs and their sheep.

We arrived in Wantage about 4 pm. Alfred’s Lodge, where we stayed overnight, was clean and tastefully decorated. The owner recommended we wet our lips at Shoulder of Mutton before dinner. The pub dates back to about 1830 and is known for its good selection of real ales. Dinner was at The Lamb, the only restaurant in town that allowed dogs.

Wantage town centre with back view of statue of Alfred the Great built 1877.

Wantage, population 10,000, was originally a Roman settlement and is famous for being the birthplace of King Alfred the Great in 849. Weekly trading rights were first granted to the town by Henry III in 1246. Markets are now held twice weekly on Wednesdays and Saturdays. St. Peter and St. Paul’s Church dates from the 13th century. Its size indicates the importance of the town as a trading center. 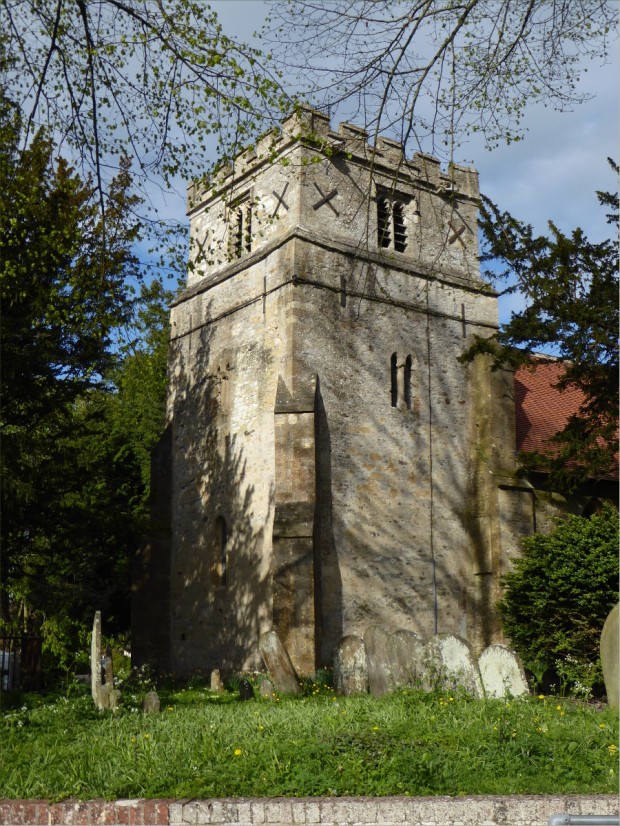 That night, I dreamed a ghost in mortal form fell in love with a young socialite named Willow Ash. He gave her gifts of clothing that had once belonged to his deceased wife, and when an epidemic swept through town, the clothing protected her by concealing from the grim reaper that she was mortal.

Tomb with rounded top and skull sculpture at St. Michael and All Angels Church, dated 1690.

To read more about our experience cycling the Ridgeway Trial, see our posts for Day 1 and Day 3.